The African Youth Survey provides a refreshingly bright understanding of a new generation of young connected Afro-optimists who are doing incredibly innovative things with nothing. The survey –  the largest of its kind – shows Africa’s young people are imbued with optimism about the future, have a strong sense of individual responsibility and want to shape their own destiny.  They also have confidence in an African identity and are fearlessly entrepreneurial.

81% predicting technology will the main driver of their changing fortunes.

Afro-Capability:  The survey suggests young people’s optimism does not rest on hope, but rather on their ability to seize the opportunities provided by the modern world. Young Africans see themselves as self-starters and believe the future fortunes of the continent will be shaped for the better by technology.

Connected:  86% of the respondents own a smartphone and half of them spend more than three hours using it each day.  Eight-in-ten young Africans consider access to Wi-Fi a human right.  Young

Afropreneurs: Half of the respondents agreed that their country is embracing the fourth industrial revolution (4iR) and those most likely to start a business within the next five years are keen on sectors such as retail and tech.

Ubuntu matters:  Young Africans view their responsibility as local and political with most young people preferring to stay in their home community than move to a different location.  Most of those who are employed are community focused and two-thirds of the respondents said they already have an idea for an enterprise which will affect positive change in their family and community.

Afro-Responsibility: Young Africans feel in charge of their destiny and want home-grown, continent-wide approaches to common issues.  They are moving beyond colonialism, are unshackled by the continent’s history of foreign influence and believe Africans can solve their own problems.

Shared Identity:  African youth identify strongly with a shared culture and history. Two-thirds of young people believe African unity is necessary to overcome the continent’s challenges and gave a thumbs up to the African Union as the unifying vehicle for collaboration.

Democratic values:  The youth are divided on whether democracy or stability is more important. Most believe in civic participation, tolerance and freedom.  A strong majority agreed ethnic minorities deserve more protection and more than half accept sexual harassment is a problem.

Madiba Magic:  86% of the total sample believes Nelson Mandela’s values are still relevant to youth today either choosing ‘freedom’ or ‘non-racism’ as core values they identified with.

Climate Change:  Despite faith in continental union, African youth hold their country responsible for contributing to the exploration of renewable energies and providing better recycling infrastructure.  Water scarcity and poaching of wild animals were major concerns.

Realism:  Young people are realistic about challenges faced by the continent such as unemployment, corruption and lack of capital – particularly start-up capital – and the spread of infectious disease is a major concern.  The spread of fake news is also viewed as problematic.

4200 respondents in 14 countries took part in this survey commissioned by the Ichikowitz Foundation.  Youth in East Africa are most optimistic about the future with Rwanda being the most positive and young people in Southern Africa the most pessimistic.

No matter the challenges, most young people across all 14 sample countries agree that the 21st century will be the “African Century” … for no other reason except their own determination to shape that century.

You can read the full inspirational report here:

Invite Steph Vermeulen to inject a shot of research-based inspiration into your conference or contract with her for a mind-shifting seminar that will uplift your teams from apathy to energy.  In meaningful and practical ways, Steph prepares people psychologically to welcome change and – in the process – makes everyone smarter and more functional. 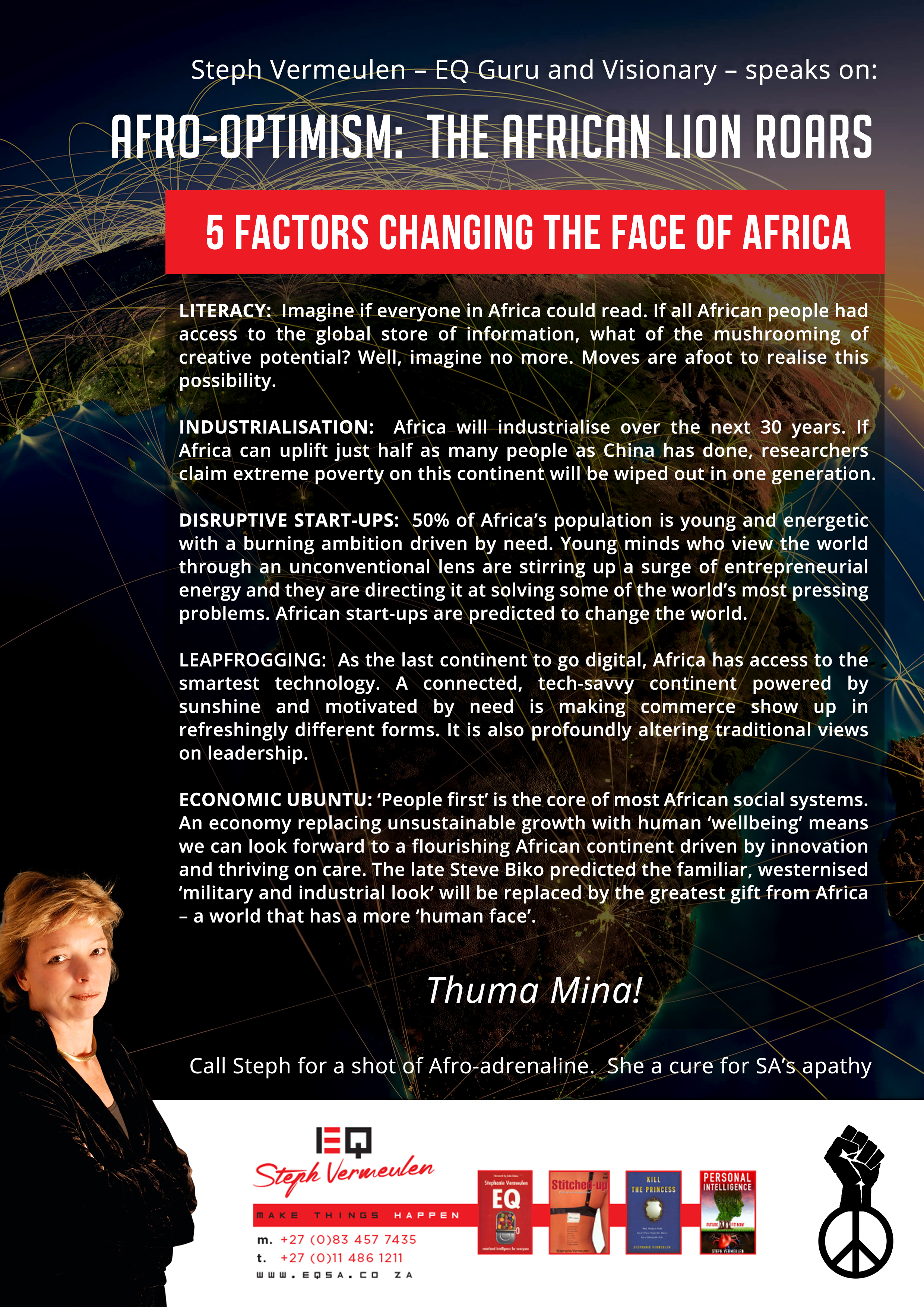