Africa attracts more than its fair share of negative attention.  To kick off 2018 on a more optimistic note, here’s a little food for thought …

At least three major influences are converging to change the face of Africa. These will shape, shift and alter the lives of all of us who calls this magnificent continental giant, “home”.

Imagine if everyone in Africa could read.  If all African people had access to the global storehouse of information, what of the mushrooming of creative potential?  Well, imagine no more.  Moves are afoot to realise this possibility. Trials have started in Tanzania for the finalists of the Global X-Prize competition to test educational apps aimed at teaching children – who have little or no access to schooling – to read, write and do basic arithmetic.  The winner will be announced in 2019 and plans are afoot for widespread distribution of the winning software.  Solar-powered tablets will be distributed throughout Africa and it is expected that illiterate adults are likely to take advantage of this opportunity too.  With only scant information, resourceful African people are already developing some remarkably creative solutions so – within the next five to ten years – we are likely to see an exhilarating economic revolution from burgeoning African innovation.

XPrize has partnered with Unesco (United Nations Educational, Scientific and Cultural Organisation), the WFP (World Food Programme) and the Tanzanian government with tablets donated by Google. 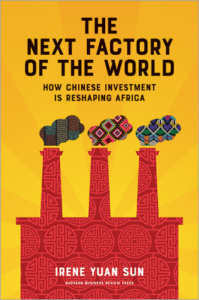 In her book The Next Factory of the World: How Chinese Investment is Reshaping Africa, American author and lead researcher for McKinsey & Co – Irene Yuan Sun – argues that China is not looking to exploit Africa’s poverty but rather its potential for wealth.  Sun says 50 years of western aid has not raised living standards – an alternative is needed. Her book lays out the compelling argument that Chinese investment is giving rise to the tantalising possibility that Africa can industrialise in one generation.  Although many claim a manufacturing led-transformation is not ideal, she points out that it’s the only way proven to raise standards across entire societies.   With growing Chinese investment, African industrialisation is following in the footsteps of Japan, South Korea, Taiwan and China.  Sun says if Africa can lift just half as many people out of extreme poverty as China has, in a mere three decades, poverty would be eliminated from the continent.  Despite the popular idea that Chinese companies import their own labour, Sun points out that China is looking elsewhere for opportunities precisely because the cost of Chinese labour has become prohibitive.  She shows that close to 90 percent of the labour employed by Chinese companies in Africa is local.   Sun’s well researched book gives rise to the real possibility that Africa is the next industrial power-house aided by Chinese investment and know-how. 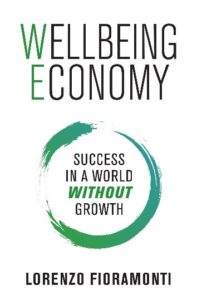 Yuan Sun sees Africa as the next regional burst of economic growth, but it also may be the last.  As the Chinese experience shows, labour costs in an industrialised Africa will eventually become prohibitive too, limiting the potential for growth.

Lorenzo Fioramonti – author of Wellbeing Economy: Success in a World Without Growth warns if we don’t put people and nature first there will be no future.  Fioramonti argues that the relentless pursuit of growth results in losses (i.e. the Steinhoff ‘Boetcoin’ bubble), greater inequality and damage to the environment.  He emphasises the need to move away from economies dominated by a few big companies towards a system led by small businesses where the future is not about exploitation but about care.

In undeveloped countries where formal education is poor, industrialisation provides the best training ground for entrepreneurs.  Recent experience in China shows a mushrooming of small businesses offering a vast range of products and services.

Africa has many needs, most of which can be met by creative entrepreneurs producing appropriate solutions likely to be distinct enough to be disruptive. It also has the advantage that the idea of ‘putting people first’ is the foundation of many African traditional social systems as well as an environment so awe-inspiring that it’s not too difficult to persuade people to preserve it.

What Africa needs now is the hands-on entrepreneurial training offered by industrialisation and tech, lots of it.  With the real possibilities offered by the convergence of technology, literacy and industrialisation, we can potentially look forward to a flourishing African continent powered by innovation and thriving on care.

To learn more about how Personal Intelligence (EQ + IQ) training can help you or your staff shift perceptions, invite Steph – the EQ Guru – to speak at your next conference or contract with her for a mind-altering workshop.  In a simple, practical way, Steph draws on neuroscience to prepare people to change their minds and – in the process – makes everyone smarter and more functional.