Memes: Are we simply viruses of the mind? 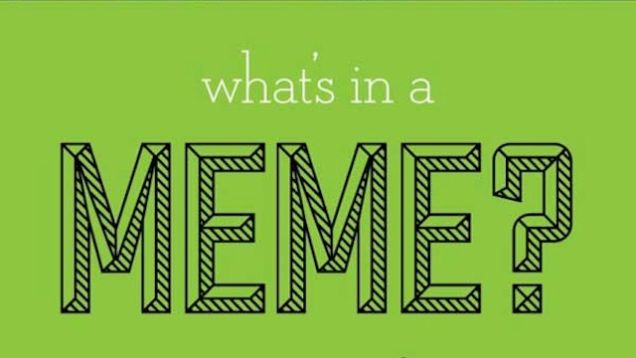 Human beings are followers of fashion and most are quite brazen about copying popular ideas, mannerisms, inventions, poetry, art, songs, recipes or even stories from one another.  Learning by imitation is what the biologist Richard Dawkins termed ‘memes’ in his book The Selfish Gene.  The word is derived from the Greek term ‘mimemes’ – meaning ‘that which is imitated’ – and Dawkins coined the term in 1976 to describe units of social conditioning that are transferred from one human mind to another.

Memes are ideas that catch-on and they may be short-term crazes or long-term beliefs persisting through generations.  This invisible social-DNA significantly influences everything we think about ourselves, our culture and nationality, our place in the world, our sense of style, taste, knowledge of right and wrong, the food we eat or what repulses us, our idea of manners or justice, our view of family, political affiliation, religion, tradition, gender roles, relationship with animals, social norms and most of our habits right down to the brands we favour and buy.  We may pride ourselves on being independent thinkers but in reality we are no more than host meme-sponges for viruses of the mind to go forth and multiply.

Memes do not replicate because they are valuable or truthful, they reproduce because they are popular. If you are under 50 years old you are likely to have caught the tattoo meme.  Body art is neither good nor bad nor is it particularly useful but the memes of your generation will dictate whether or not you will get inked.  Take also the success of the trilogy 50 Shades of Grey.  By all accounts, these books were poorly written and the entire story would have been better summed up as follows: “He asked if he could abuse me.  I said ‘no’.  The End.”  The millions of Shades books (and movie tickets) sold show that good literature is not a requirement for spreading memes; neither is the truth.

Richard Brodie – in his book Virus of the Mind -makes it clear that evangelism is the common thread in why certain ideas spread and – even if that meme contains a valuable truth or a good idea -silence is death to a meme.  For Brodie, the media is one big fat meme spewing machine and television is its most powerful evangelist.  Meme-themes most likely to push our buttons include stories about danger, food, sex and authority and because sensationalised rolling news shouts all four themes all day, every day, it is most powerful in capturing attention and therefore in influencing views.

While Brodie’s book is considered memes-lite, Susan Blackmore’s work –The Meme Machine – offers more of a scientifically based analysis with Dawkins lending his support by writing an enthusiastic foreword.  Blackmore is of the view that imitation is what makes humans different from other animals and, while some creatures may mimic behaviours to a small degree, humans imitate everything.  So prolific is learning by imitation, Blackmore puts forward the idea that the size of the human brain has less to do with intelligence and more to do with the large amount of brain power necessary to absorb volumes of cultural memes.  All creatures are gene machines but we humans, Blackmore claims, are both gene and meme machines and she takes this a step further by claiming that the idea of ‘self’ is purely a conglomerate of memeplexes – or personal stories – that add up to who we think we are.

But is this learnt sense of self really who we are and is it healthy to allow this blueprint to continue dictating who we become in future?

As said by Blackmore; ‘Perhaps the greater part of true morality is simply stopping all the harm that we normally do …  that is, the harm that comes from having a false sense of self.’  If most of our arguments boil down to my memes versus yours then surely an understanding of these viruses of the mind can put an end to harmful human violence and create more considerate societies.