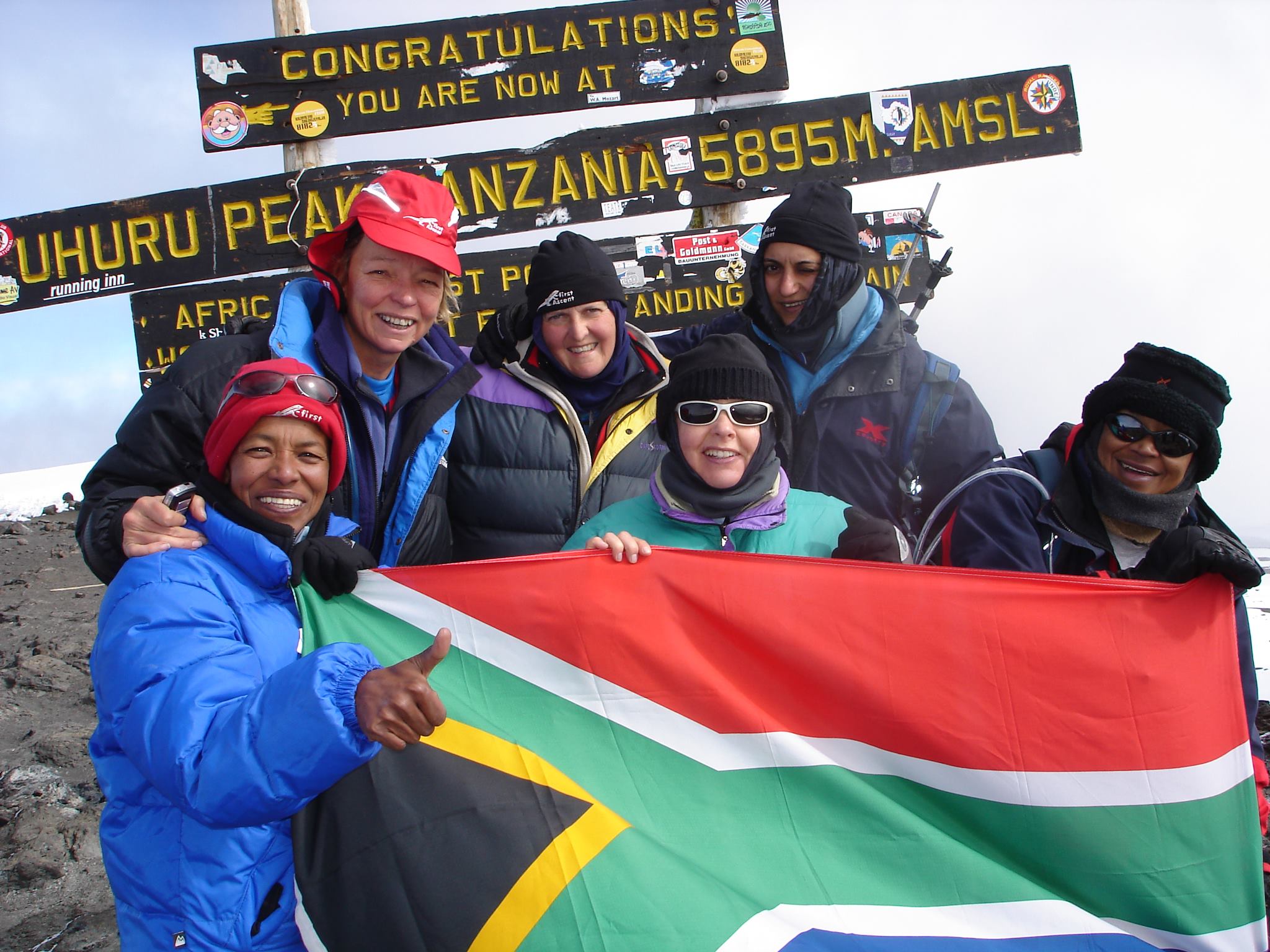 Fifty years after 20 000 South African women took to the streets to march against apartheid, author Stephanie Vermeulen is one of six females to have undertaken a challenging walk of a different kind – to summit the highest free-standing mountain in the world: Africa’s own Mount Kilimanjaro.

For me organising a holiday is usually a simple affair. I spot a schedule gap, do a frantic web search, book, pay, pack half an hour before leaving for the airport and go. This time was different, though. Never before has holiday prep required so many months of physical exertion, never-ending shopping sprees, incessant tête-à-têtes about fabrics, fudge and foot-powder and even a wet-wipe-showdown. This was necessary however, to prepare for the walk of a lifetime.

The plan: For a group of middle-aged wild women to summit on the 9th August 2006; the 50th anniversary of the Women’s March to Pretoria; a day celebrated annually in South Africa as ‘National Women’s Day’.

Of course many people have climbed this portentous mountain but when the reality sinks in that it’s going to happen to you, it’s difficult to be blasé about it.

Our first challenge was for a group of fiercely independent women to learn to take direction from a man. For the sake of our mountain guides’ sanity we knew that practise was a must, so all training walks involved putting my husband in front of the girl-gaggle. Fortunately his sense of humour saw him through a task that could only be likened to herding a bunch of very unruly feral cats.

Next we had to quickly acquire some compulsive shopping habits. There is nothing in one’s wardrobes suitable for such a jaunt – including (or should I say especially) one’s much treasured cotton socks and jocks. But listening to the sales spiel in ‘happy camper’ stores you couldn’t help but wonder about the real possibility of conspiracy theories. When every enquiry about highly inflated price-tags was met with the answer “fabric technology” it’s not paranoid to believe that you have entered a very foreign material world.

Now I’m baffled enough by normal technology but the idea of plastic micro-thingies that neutralise nasty bodily emissions was a bit too much for my over-active imagination.

So equipped with a collection of badly colour co-ordinated synthetic clothing and some newly acquired leg muscles, our first encounter with Tanzania was the inevitable immigration form. This was a relatively simple affair:

The one thing that we couldn’t prepare for, however, was the offensive that would be launched against our inner princess. People who know me would say that my resident princess was buried a long time ago and – while I wasn’t about to pack a pair of high heels ‘just in case’ – a few remnants remain: As a rule I don’t camp and the only crapper I will seat my expansive bottom on is the pristine flushing variety.

On Kili the initiation is immediate – there’s no easing into the hardships to come and the first olfactory assault was launched upfront at the entrance gate where the overpowering loo stench is just the thing to prepare one for far worse things to come.

Most people who have earned their Kili-badge seem to complain about two things. The first, understandably, is the altitude but, the second I didn’t expect; this involved having numerous detailed conversations with relative strangers about pit-toilets, known throughout Africa as long-drops. The word ‘long’ is however a bit of a misnomer. In reality these vilest of vile outhouses are shallow pits, more appropriately re-named short-drops, which provide much unwelcome visual input for the unsuspecting visitor. Now I don’t deal in the realms of either shite or vomit but too many sightings of the first invariably led to spontaneously inducing the second.

The Mama of African Mountains unveiled herself for the first time on the afternoon of the first day and her magnitude was positively awe-inspiring – not to mention a little unnerving. For me Kili had always been an impressive sighting to be admired at eye-level from an aeroplane. It wasn’t something that you contemplated hauling your own butt up and, at that moment, Mama Mountain was just a little too close for comfort.

Reassuringly our infinitely patient local expedition chief kept egging us on with the Swahili Kili-mantra pole-pole – meaning slowly, slowly. He also only ever referred to the mountain as ‘she’.

It’s a well-known fact that women release nervous tension by indulging in excessive chattering, and our group was no exception. You would think that if you put an activist, an anarchist, an engineer, a lawyer, a political advisor and a TV producer together, you could expect some modicum of intelligent conversation. In our case you would have been sorely mistaken. The claptrap spoken ranged from the antics of the ‘jock-gnome’ who ‘hid’ things like underwear and sleeping bag liners, to the benefits of vaporising the entire contents of our colons thereby avoiding the necessity of making any further short-drop deposits.

On more occasions than I can remember the laughter from way too much ‘over-share’ completely crippled any attempt at walking, making pole-pole an inevitability rather than a recommendation.

One of the central themes was the struggle to identify the right name for our group. It was only when our head guide revealed to us that his surname is ‘Minja’ that the inspiration came. But having to explain to a male Tanzanian national that his name makes some rather obvious reference to the all-important female body part proved too much of a stretch, so we chortled and kept the name to ourselves. The guffawing and yakking coupled with some loud but not very tuneful singing meant that The Minja Ninjas did not traverse the mountain unnoticed.

Thankfully, we had some equally raucous company in the form of a woman called Zuki Matamo; a fellow South African who was attempting to conquer the mountain as well. But there’s more to this lively woman’s story; for Matamo, Kili was the first of her Seven Summits (a gruelling challenge to conquer the highest mountain on each continent) and when she and her two female climbing partners end their journey on top of Everest (in late2007), they will be the first African women to do so. Along with our obligatory national flag, Matamo also had brought with her a bright yellow noisy hooter, more commonly found at football matches. Our parties kept passing one another with much tooting and yelling to commemorate each occasion.

The absurdity of getting out of a warm sleeping bag in the middle of the night to start the summit didn’t escape any of us. This early rise may be necessary to cross the snow while it’s still frozen but, I ask you, who in their right mind goes for a midnight stroll up the equivalent of Cape Town’s Table Mountain at temperatures way below zero, dressed like a blimp?

As if by some cosmic design, the heavens produced a full moon on our summit night and we had to concede that the light was brighter than most seedy bars you would more likely find yourself stumbling around in during such ungodly hours.

But that night the Goddess of the She-mountain smiled upon us with clear skies, crisp, twinkling snow and, below us, a bright orange sea of cloud to welcome the morning. We may have seen some spectacular sunrises but none so moving as the one that greeted us way above 5000 metres on the mountain.

At this altitude our enthusiasm had started to wane and the effort required to put one foot in front of the other finally silenced every one of us. The only sounds you could hear on the otherwise still mountain were the hefty sighs of relief from our guides who in a big-hearted African way dragged the females-of-the- speechless to the top of the She-mountain.

It was a slow business shuffling to the most photographed sign at 5,895 metres (19340 feet) in the African sky and, naturally, it was a very emotional experience when we eventually got there.

Unlike a group of bravado-filled South African males who had also set out for the summit on the same evening, all six Minja Ninjas made it, compared with only two out of the ten men. Perhaps the macho males should have known better than to attempt to summit the She-mountain on the same day that our home country was celebrating the victory of female defiance.

So, at final count, the score was:

(Zulu phrase meaning: Praise the Name of the Women)